← more from
Saustex Records
Get fresh music recommendations delivered to your inbox every Friday.
We've updated our Terms of Use. You can review the changes here. 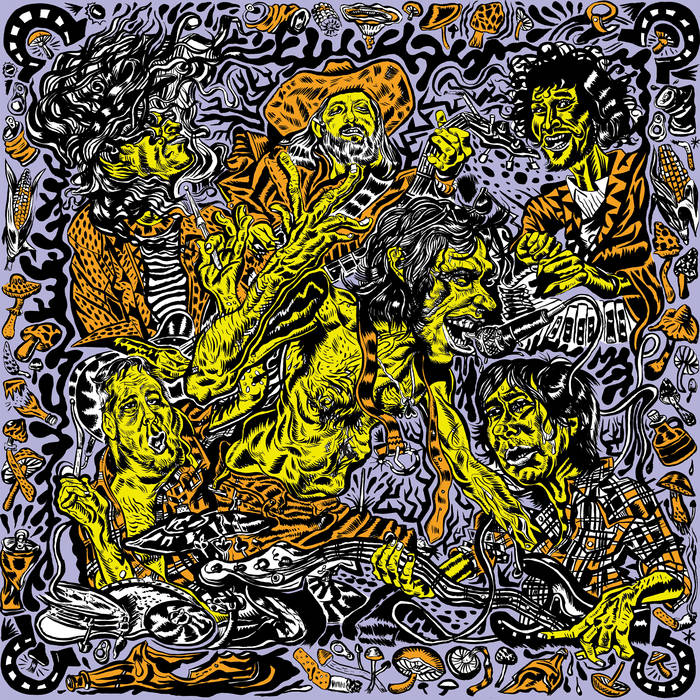 kacey fisher Love the Hickoids! You need to make the artwork for All The World A Dressing Room a shirt. Badass!

When the Hickoids rolled up to Cafe NELA last August we weren’t expecting to make a live album, much less a double live LP, one of the key hallmarks of 70’s and 80’s rock’n’roll excess and bloat. We were simply looking forward to playing a fun show with good bands and seeing a lot of old friends at the unassuming venue in the Cypress Park area of northeast Los Angeles.

Indeed, our one real attempt at making a live recording in the late 80’s was a catastrophe. The performance was a drunken shambles. The recording itself was marginalized by inebriated and over zealous fans and band members knocking microphones out of position. And, the guy we paid a grand (on loan from Toxic Shock Records) who was running the mobile truck didn’t seem to get or care for us. It all amounted to a thousand dollars worth of un-mixable magnetic tape that wasn’t good for anything other than perhaps pulling some bizarre blackmail scheme on ourselves.

So, come October 2018 when friend Paul Escamilla alerted me to the posting of a recording of the show on a bit-torrent file-sharing site and said, “This is the Hickoids live album!," I was skeptical at best. We’ve had folks hand us dozens of decent recordings over the years but they all seemed to miss the mark in some way or another. Still, trusting Paul as someone who had a long history of seeing the band over the years, I was intrigued enough to download it and give a listen. While it has numerous imperfections,  it does accurately capture our spirit and sound. I was sold and the fact that we could bootleg the bootleggers was especially appealing. It was as if we were getting the thousand dollars we wasted three decades ago back with interest.

BP Fallon shared a story with me about one particular day he was working at the London office of The Beatles' label Apple Records. It seems there was some important meeting and George Harrison was conspicuously absent. BP inquired as to his whereabouts and the answer was “he’s off recording the live album," never mind that the show had taken place a couple of months before. Even an insider has to be welcomed behind the curtain at some point.

This anecdote is illustrative of the sad fact that most of the live albums we recall fondly are not really “live". They are composite works assembled over months from a base session recorded at one or several concerts after several days of set up time. Then, all the mistakes are recorded over, and, frequently the vocals and guitars are entirely re-recorded in a studio. And of course, if you have any doubt you’re listening to the greatest rock’‘roll band in the world, the roar of an adoring clamorous audience is often added at key points, if not throughout.

Such is absolutely not the case here. It was recorded without the benefit of a soundcheck, our own person behind the mixing board, a dialed in monitor mix, guitar tech or set list; “throw and go” as we say in small potatoes rock’n’roll. This album is the entire show as it went down. The only slight alterations that have been made are some compression and equalization to improve the overall mix, some editing of between song banter and dead air (to accommodate the time limitations of the single CD format), and, the re-sequencing of a couple of tunes to accommodate the vinyl format and not squeeze too much music on any given side.

It’s all here; the good and the bad, the clams and the jams, the spit and the sweat, the raunch and the roll. It’s imperfect but honest. If a double LP seems excessive for a thinly known band from Texas just remember: a little dog dreams the same size as a big dog.

The Hickoids are a long-running cowpunk band that trace their roots to mid-1980's Austin. The band was inducted to the Austin Music Hall of Fame in 2014 and since reforming in 2006 has toured extensively around the U.S. and Europe.

Bandcamp Daily  your guide to the world of Bandcamp

Semiratruth joins the show to discuss their latest release, "loading..".